A warm welcome to the Church of Light at the World Reformation Exhibition!

The modern Protestant Church of Light is located at the Globalization / One World Gate next to the historic churches in Wittenberg. Developed by the Protestant Church in Hesse and Nassau for exhibition settings and constructed from Plexiglas, the mobile church endeavors to give contemporary expression to the basic ideas of the Reformation.

The church – one-of-a-kind in the world – not only symbolizes the mobility and the colorfulness of faith, but at the same time serves as a place for encountering God and meeting people from all over the world. The church provides a doorway into contemporary spirituality, as well as functioning a unique venue for special events.

“Moments of Blessing“ will be offered at the Church of Light. In addition, there will be a wide array of prayer and worship services, music and dance, and cultural events – please stop by and experience what it means to be blessed as a person.

The meaning of light as a profound symbol in the Jewish-Christian faith tradition is underscored by the illuminated church, particularly at night.  Please plan to visit the special “Nights of the Lights“.

The form of the Church of Light makes it clear that it is intended as a church building. Constructed from wood and translucent acrylic glass panels, the church is illuminated with multi-colored LED lights. The church measures eight meters in height, 14 meters in length and 4.5 meters in width. The interior area accommodates some 40 visitors, with additional room for 200 persons in the outside area. The church is also equipped with three small bell towers and furnished with a baptismal font.

The Church of Light has received four prizes and awards for outstanding architecture and lighting design.  First displayed in Darmstadt in 2009, the church will be presented for the eighth time in Wittenberg.

BlessU-2 is an interactive experiment

BlessU-2 is an interactive experiment of the Protestant Church in Hesse and Nassau for the 500th Anniversary of the Reformation. It can be seen until september at the World Reformation Exhibition at Wittenberg (Saxony-Anhalt) near Berlin.

The idea was to confront people in the 21th century with the meaning of blessing and the approaching digitalization with artificial intelligence. The church has worked together with Alexander Wiedekind-Klein, a creator for special effects and the founder of the first robot magazine for professionals in Germany “Roboterwelt”. Fun fact: the technology of BlessU-2 is based on an atm-machine initially designed to keep track of our money for the project.

BlessU-2 speaks, including “hessonian” dialect, seven languages. You can choose between a male or female voice and different situations. The machine than choses a special blessing for you based upon more than 40 Bible verses. In the first week of the exhibition the robot blessed more than 600 times; sometimes he must be cooled by an additional fan.

Blessu-2 is part of a special “parcours”, an interactive, education trail just outside of our mobile “Church of Light” with the theme “Moments of Blessing”. Anyone can receive blessings. Children in particular are fascinated and amused by the robot. The visitors have the possibility to comment their experience by pen or on the internet.

The idea is to stimulate debate and thinking about the future of the church in a world full of electronic devices – all that with a twinkle in our eye. And that works. People who stop by are curious, amused and interested. They are really taken with it, and are very positive.

It’s clear: We don’t want to replace human pastors with robots. Because of that we also offer baptisms and weddings in the “Church of Light” in Wittenberg – done by real human pastors. Worshipers needn't worry about clergy being replaced with machines. We know: Robots could never substitute for pastoral care. We don’t want to robotize our church work, but see if we can bring a theological perspective to a machine and a world full of high-technology. 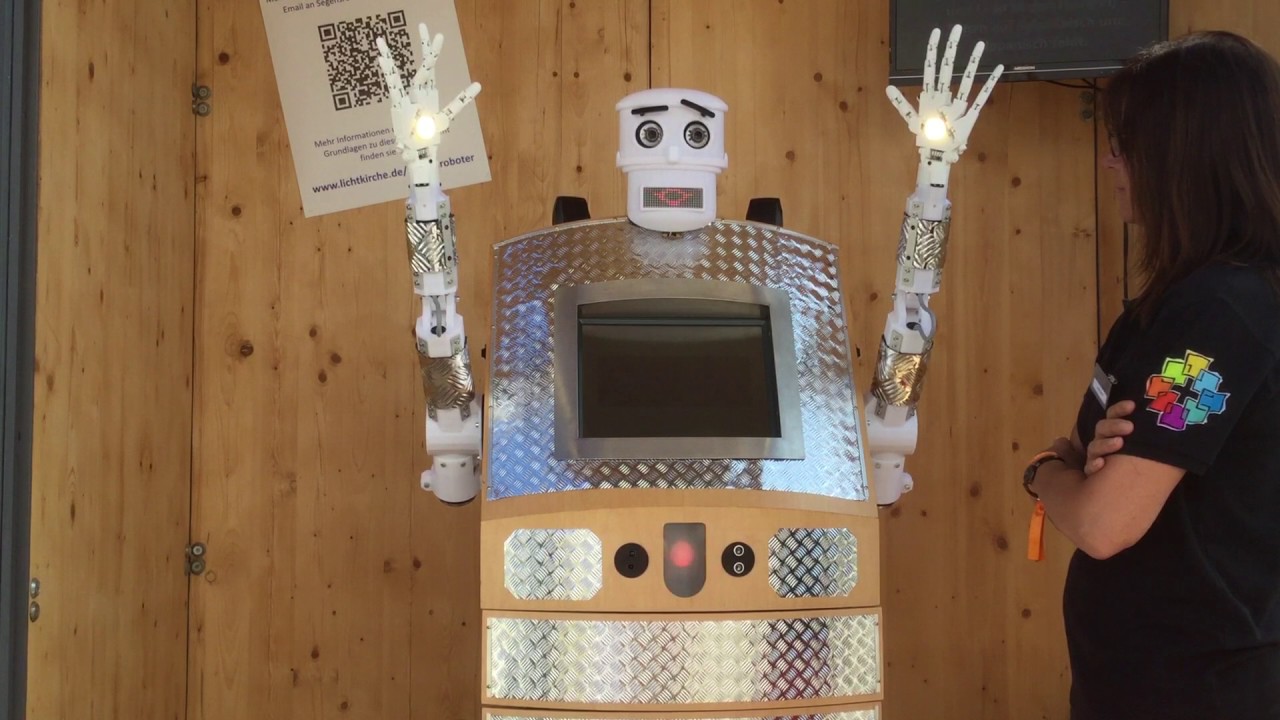 Talk about your experience!
Tell us about your impressions with "BlessU-2".